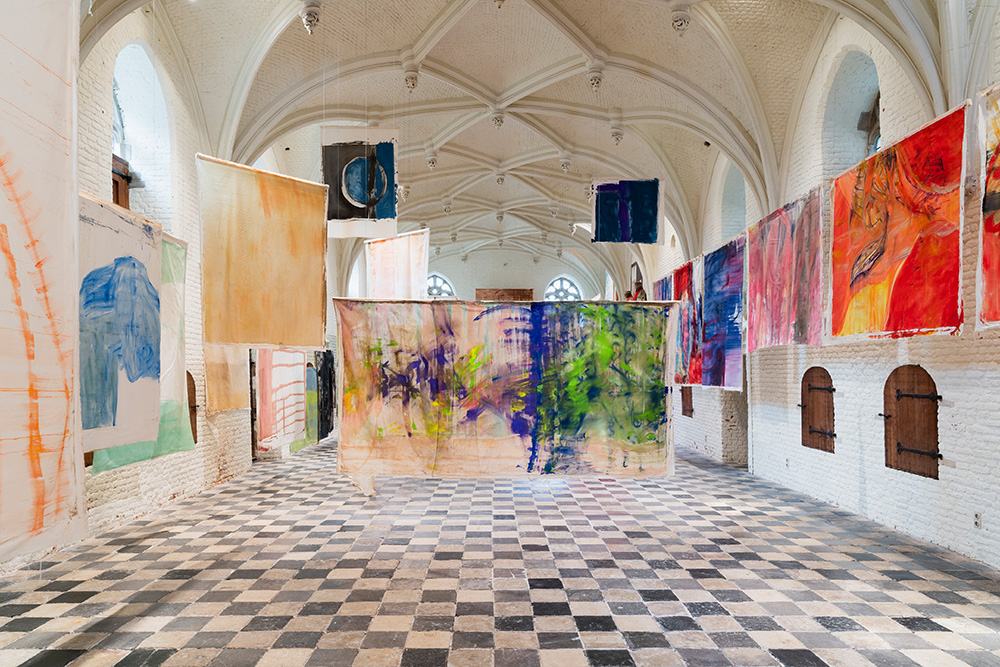 The Argentinean-Swiss artist Vivian Suter has lived on a former coffee plantation in Panajachel, Guatemala, since the 1980s, at a far (geographical) remove from the art world, which for years paid her little attention. More recently, however, she has garnered considerable acclaim and her work has been shown around the world, including, most prominently, at documenta 14 (2017).

Informed by two devastating natural disasters in 2005 and 2010—vast landslides that coated her works, which she had stored in a barn, with sludge and ostensibly destroyed them—her painterly oeuvre reflects a close interplay between art and nature. The two events mark a turning point in the evolution of her creative approach, having profoundly and lastingly changed her understanding of authorship. She initially thought of the traces of the natural phenomena as destructive damage to her canvases, but then she radically changed her mind and began to conceive of the interplay with nature as a productive and creative process. She now works on her imposing paintings both in the studio and in the open air, deliberately exposing her colorful compositions, typically in large formats, to the elements. The tropical garden is the scene of a playful engagement with her materials, with canvases resting on the sandy ground or hanging from trees; dust, mud, leaves, mangoes, and insects leave their traces—her paintings are shaped both by organic processes and by coincidence.

Suter often presents her canvases without stretcher frames and hanging freely from the ceiling in densely staggered layers or on custom-built structures in sprawling installations. The visitors effectively amble through her painterly oeuvre, immersing themselves in a dense experience of colors, traces of the creative process, shapes, and abstractions. Each canvas retains its autonomy while also entering into an intimate dialogue with the other works, engendering a kind of evocative ecosystem of climatic, sensory, and emotional experiences.

From May 5 to September 3, 2023, mumok - Museum moderner Kunst Stiftung Ludwig Wien will present the exhibition Fantasiefabrik by the artist Elisabeth Wild, the mother of Vivian Suter.