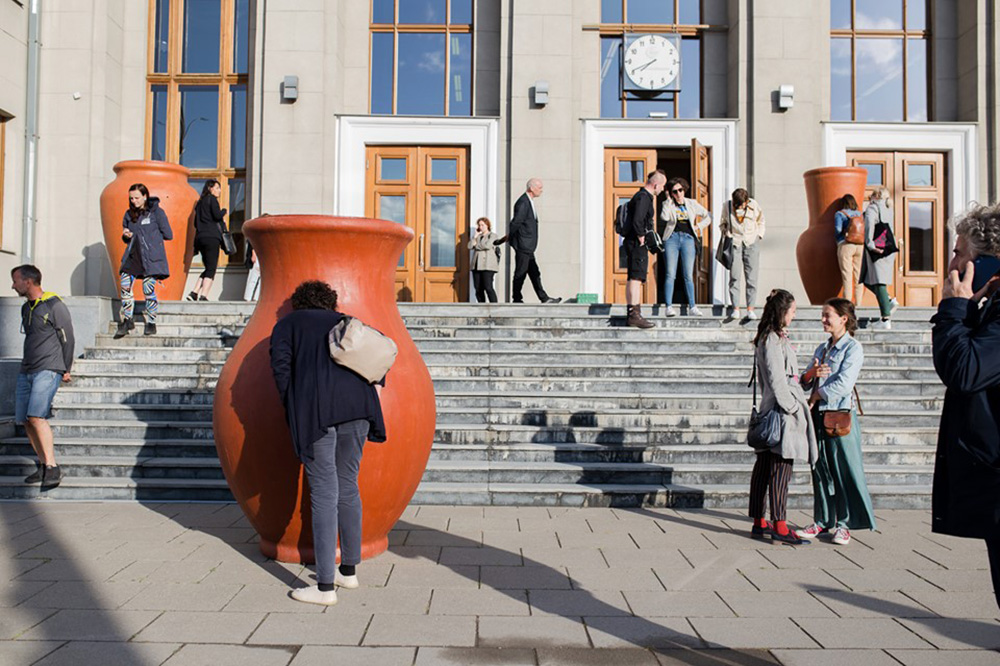 Mykola Ridnyi is an artist, sculptor, filmmaker, essayist, and curator. His performances, installations, sculptures, and short films reflect the social and political realities of today’s Ukraine. Crossing media boundaries, his work ranges from early political actions in public settings to creations that meld site-specific installation, photography, and moving images. In his most recent films, he has experimented with techniques of nonlinear montage and collage on the intersection between the documentary and fictional registers. The power of the past over our present and future and the manipulation of historical memories motivated by contemporary political agendas are among his core themes.

Ridnyi is a founding member of SOSka, an artists’ collective that originated in Kharkiv, Ukraine, and coeditor of Prostory, an online magazine about art and society. His work has been shown in Ukraine and abroad, including at the Venice Biennale; the School of Kyiv—Kyiv Biennial; Pinakothek der Moderne, Munich; daad galerie, Berlin; Transmediale, Berlin; the Center for Art and Media, Karlsruhe; Galerie für Zeitgenössische Kunst, Leipzig; the Museum of Modern Art, Warsaw; and Bonniers konsthall, Stockholm. He has won numerous fellowships, including from the Berlin Academy of Arts; Iaspis, Stockholm; and Gaude Polonia, Cracow. In Austria, Ridnyi was a fellow at Künstlerhaus Büchsenhausen for six months in 2021 and, most recently, an artist-in-residence at Q21, Vienna, in January 2022. The 2022 edition of Steirischer Herbst showcases a 2008 video created in response “to Russia’s unexpected assault on Georgia in 2008.” “This short war took place six years before the annexation of Crimea—and fourteen years before the all-out invasion of Ukraine. Today, it appears as a precise indication of the present war’s first appearance in the distance, transposed onto a summer idyll.”

Mykola Ridnyi was born in Kharkiv, Ukraine, in 1985 and lives and works there.