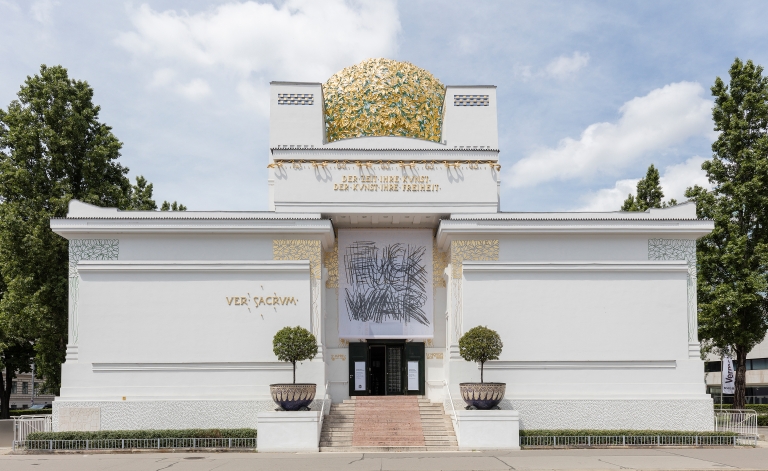 In view of the ongoing war in Ukraine, the board of the Secession invited the artist Nikita Kadan to design the banner above the entrance to the Secession.

Kadan’s work features a direct, outspokenly aggressive slogan—an outcry against the war with all its horrors and cruelties.

The image is from the artist’s series Repeating Speech, which contains drawings of simple political slogans, made after the start of the full-scale Russian invasion of Ukraine. Each slogan is written numerous times on one sheet of paper. Writing “Close the Sky,” “Fuck War,” “Stop Putin,” “Cheap Gas Cheap Blood,” “Russian Warship Go Fuck Yourself” and other slogans actively used in the protests against the Russian invasion turned into a process of endless repetition, transforming political speech into a spell. Verbal protest against the ongoing war comes to resemble a magical practice.

Nikita Kadan was born in Kyiv in 1982 and lives and works in Kyiv. In 2007, he graduated from the National Academy of Fine Art (Kyiv) with a degree in monumental painting. Kadan has been a member of the artists’ group R.E.P. (Revolutionary Experimental Space) since 2004 and a founding member of HUDRADA, a group of curators and activists, since 2008. He participated in the Venice, Istanbul, Kyiv, and Busan Biennials. Kadan’s works are held in the collections of museums including the Pinakothek der Moderne (Munich), mumok (Vienna), M HKA (Antwerp), the Musée d’Art Moderne de Paris, the Centre Pompidou (Paris), Museum of Modern Art (Warsaw), and the National Art Museum (Kyiv). He has had solo exhibitions at M HKA, Antwerp (2018); mumok, Vienna (2019); the National Gallery, Lviv; and the PinchukArtCentre, Kyiv (2021).