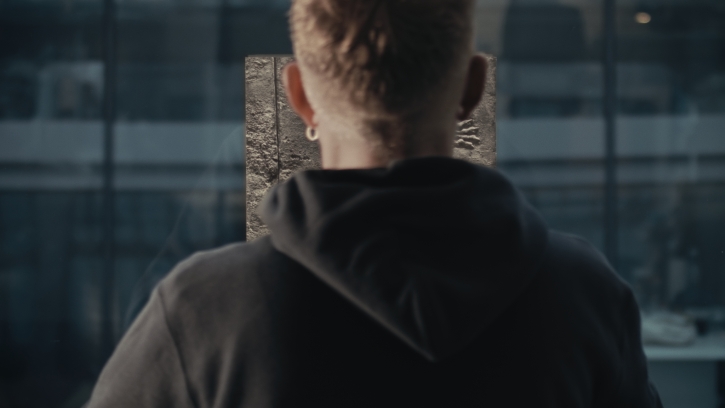 For more than 20 years, in addition to photography, sculpture, and texts, various forms of film and video have been the focus of Charlotte Prodger’s work, which deals with questions of gender politics, individuality, and freedom. The basis of her critical attitude towards social norms is a rootedness in queer culture. In her work, she presents the effects of prevailing structures and social norms on humans. She is concerned with free spaces and unencumbered pre-forms of social life that allow the individual to develop unhindered.

Prodger has followed, in real time as it were, the rapid progress in the field of video technology up to the advent of smartphone cameras and in recent years she has filmed almost exclusively with her smartphone, which has become a physical extension of the body for her. She is fascinated with its potential as prosthesis, as a connection between body and machine, as a nexus of the individual to the world through social media. The relationship of technology with the society that produces it as well as the inseparable relationship between form and content are the foundations for Prodger, whose work combines autobiographical topics with material from paleontology, anthropology, sociology, and art history.

Prodger’s films are always based on personal research and are correspondingly subjectively colored. In her films and texts, the audience can experience intimate aspects of her life in brutal detail. Like an archaeologist, her work reveals a long tradition of queer culture. In contrast to this are the minimalist sculptural elements that she creates for her film presentations. They signify an objective, deterministic attitude and accentuate the work’s own contrast between personal development and structural restriction in a binary social system. In her work, these contradictions are combined in impressive images of subtle-sensual quality.